Surprised by a surplus 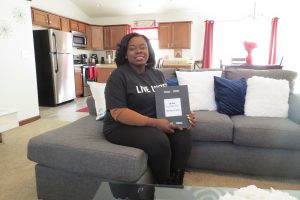 Dynisha heard of the Dream$avers IDA program from her mother a few years ago, but didn’t apply right away. In April 2016, she took the plunge to see if she was eligible.  She worked first with Jessica George, and then was transferred to Joel Zwier to finish the program.

“My credit was holding me back,” she said. “I took the Money4Life classes, and it got me situated. I really appreciated the classes because I learned a lot about budgeting and saving.”

Regarding the IDA, Dynisha comments she was “anxious to get to the end to see how much it was going to help. Help was an understatement! The IDA covered all of my closing costs, with some left over.” She feels that the IDA program creates initiative to save. “It’s different when you’re trying to save on your own. Not being able to touch the money (until the end of the program) really helped; it holds you accountable.”

She was hoping to build in the neighborhood where she now lives. She had been looking at a lot, but then a house on that street came up for sale. There were many issues along the way–including being told that the house was built too close to the road!—but everything worked out at last, and Dynisha was able to move in to her new home in October of 2017. “I definitely wouldn’t be a homeowner this soon,” she said, “without this program.”