Following through to a new house 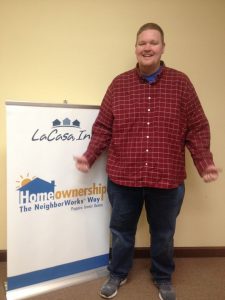 Allen Curtis began working with lacasa in September, 2016, after taking our Money 4 Life classes. His goal was to become a homeowner, but he needed help due to limited income. After waiting for new accounts to become available, Allen opened his Dream$avers IDA with lacasa in April 2017. It didn’t take long for him to get mortgage-ready, but a new problem arose of finding a suitable home within his price range. He remained persistent and found the perfect home in late November 2017.

As he successfully closed out his account in January 2018 to access his funds for the closing on his new home, his counselor, Jessica George, asked him about his experience. He said that he had really liked working with lacasa. He found the Homebuyer class to be the most individually beneficial component, providing “a lot of great information, especially through the group discussions.” He thought that becoming a homeowner “would have been very difficult without the help” he received.

He reflected further: “I thought it would be a lot harder to go through this process, and I was nervous at first, but it was actually pretty easy–just a lot of paperwork! Everyone that worked with me was very helpful and I would recommend the program to anyone. In fact, I already did, just the other day!”